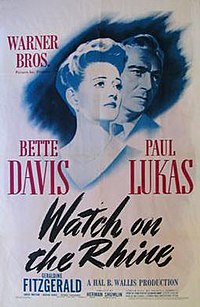 In 1940, German engineer Kurt Muller, his American wife Sara, and their children Joshua, Babette, and Bodo cross the Mexican border into the United States to visit Sara's brother David Farrelly and their mother Fanny in Washington, D.C. For the past 17 years, the Muller family has lived in Europe, where Kurt responded to the rise of Nazism by engaging in anti-fascist activities. Sara tells her family they are seeking peaceful sanctuary on American soil, but their quest is threatened by the presence of house guest Teck de Brancovis, an opportunistic Romanian count who has been conspiring with the German Embassy. Teck, married to the younger Marthe, tries to force her to learn more about the Mullers. She and David are attracted to each other and she finds her husband's politics horrendous.