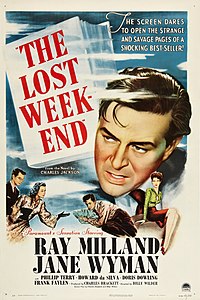 The Lost Weekend is a 1945 American film noir drama film directed by Billy Wilder, and starring Ray Milland and Jane Wyman. It was based on Charles R. Jackson's novel of the same name about an alcoholic writer. The film was nominated for seven Academy Awards and won four: Best Picture, Best Director, Best Actor, and Best Adapted Screenplay. It also shared the Grand Prix at the first Cannes Film Festival, making it one of only three films—the other two being Marty (1955) and Parasite (2019)—to win both the Academy Award for Best Picture and the highest award at Cannes.

On Thursday, alcoholic New York writer Don Birnam is packing for a weekend vacation with his brother Wick. When Don's girlfriend Helen drops by with two tickets for a concert that day, Don suggests that Wick attend with Helen. Knowing they had disposed of all the liquor Don had hidden in the apartment and thinking he has no money for more, they go to the concert.