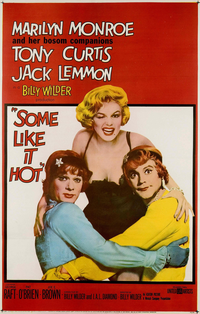 Some Like It Hot is a 1959 American black-and-white romantic comedy film directed and produced by Billy Wilder, starring Marilyn Monroe, Tony Curtis, and Jack Lemmon. The supporting cast includes George Raft, Pat O'Brien, Joe E. Brown, Joan Shawlee, Grace Lee Whitney, and Nehemiah Persoff. The screenplay by Wilder and I. A. L. Diamond is based on a screenplay by Robert Thoeren and Michael Logan from the 1935 French film Fanfare of Love. The film is about two musicians who dress in drag in order to escape from mafia gangsters whom they witnessed committing a crime (inspired by the Saint Valentine's Day Massacre).

In February 1929 in Prohibition-era Chicago, Joe is a jazz saxophone player and an idealistic gambler and ladies' man; his level-headed friend Jerry is a jazz double bass player. They work in a speakeasy (disguised as a funeral home) owned by gangster "Spats" Colombo. Tipped off by informant "Toothpick" Charlie, the police, led by treasury agent Mulligan, raid the joint. Joe and Jerry flee, only to accidentally witness Spats and his henchmen exacting revenge on "Toothpick" and his own gang (inspired by the real-life Saint Valentine's Day Massacre). Poor and eager to get out of town, Joe and Jerry disguise themselves as women named Josephine and Daphne so they can join Sweet Sue and her Society Syncopators, an all-female band headed to Miami. They board a train with the band and its male manager, Bienstock. Joe and Jerry notice Sugar Kane, the band's vocalist and ukulele player.