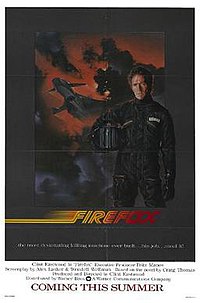 Firefox is a 1982 American action techno-thriller film produced, directed by and starring Clint Eastwood. It is based upon the 1977 novel of the same name by Craig Thomas.

A joint British-American plot is devised to steal a highly advanced Soviet fighter aircraft (MiG-31, NATO code name "Firefox") which is capable of Mach 6 (hypersonic flight), is invisible to radar, and carries weapons controlled by thought. Former United States Air Force Major Mitchell Gant, a Vietnam veteran and former prisoner of war, infiltrates the Soviet Union, aided by his ability to speak Russian (due to his having had a Russian mother) and a network of Soviet dissidents, three of whom are key scientists working on the fighter itself. His goal is to steal the Firefox and fly it back to friendly territory for analysis.