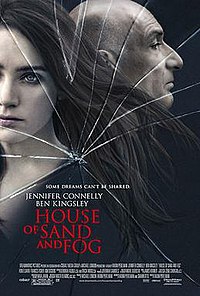 House of Sand and Fog is a 2003 American psychological drama film directed by Vadim Perelman. The screenplay by Perelman and Shawn Lawrence Otto is based on the novel of the same name by Andre Dubus III.

Abandoned by her husband, recovering drug addict Kathy Nicolo, living alone in a small house near the San Francisco Bay Area, ignores eviction notices erroneously sent to her for nonpayment of business taxes. Assuming the misunderstanding was cleared up, she is surprised when Sheriff's Deputy Lester Burdon arrives to forcibly evict her. Telling Kathy that her home is to be auctioned off, Lester feels sympathy for her, helps her move out, and advises her to seek legal assistance to regain her house.