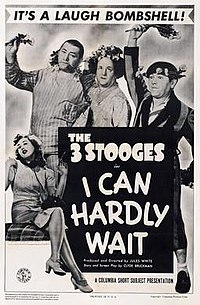 "I Can Hardly Wait" is a 1943 short subject directed by Jules White starring American slapstick comedy team The Three Stooges (Moe Howard, Larry Fine and Curly Howard). It is the 73rd entry in the series released by Columbia Pictures starring the comedians, who released 190 shorts for the studio between 1934 and 1959.

The Stooges are defense workers at the Heedlock Airplane Corp., a pun on the Lockheed Aircraft Corporation. In the opening scene, they enter an apartment and break into a safe, which turns out to be a refrigerator. With the food they find, they prepare a late night meal of a single slice of ham, an egg, bread and coffee. Moe and Larry share the food, and Curly gets the bone and the eggshell. While eating, Curly breaks his tooth while attempting to eat the ham bone, resulting in a major toothache. Moe suggests he simply gets some sleep, and in the morning the toothache will be gone.