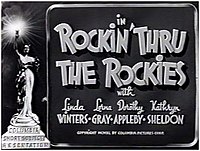 Rockin' thru the Rockies is a 1940 short subject directed by Jules White starring American slapstick comedy team The Three Stooges (Moe Howard, Larry Fine and Curly Howard). It is the 45th entry in the series released by Columbia Pictures starring the comedians, who released 190 shorts for the studio between 1934 and 1959.

The Stooges are guides (circa late 1800s), who are helping a trio christened "Nell's Belles" travel across the Rocky Mountains to San Francisco, the location of their next performance. While preparing some corned beef, a group of Native Americans and urges them to get off their land as soon as possible. Since Curly scared off the horses earlier, the group is stuck there for the night.