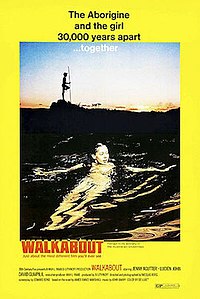 Walkabout is a 1971 adventure survival film directed by Nicolas Roeg and starring Jenny Agutter, Luc Roeg, and David Gulpilil. Edward Bond wrote the screenplay, which is loosely based on the 1959 novel Walkabout by James Vance Marshall. Set in the Australian outback, it centres on two white schoolchildren who are left to fend for themselves in the Australian outback and who come across a teenage Aboriginal boy who helps them to survive.

A white teenage girl and her younger brother live with their parents in a modest high rise apartment in Sydney. One day their father drives them into the Outback, still in their school uniforms, ostensibly for a picnic. As they prepare to eat, the father draws a gun and begins firing at the children. The boy believes it to be a game, but the daughter realises her father is attempting to murder them, and flees with her brother, seeking shelter behind rocks. She watches as her father sets their car on fire and shoots himself in the head. The girl conceals the suicide from her brother, retrieves some of the picnic food, and leads him away from the scene, attempting to walk home through the desert.