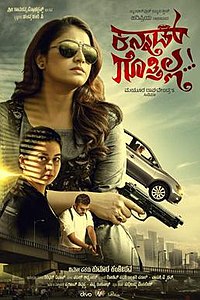 Kannad Gothilla is a 2019 Indian Kannada language thriller film written and directed by Mayuraa Raghavendra making his debut. It is produced by Kumar Kanteerva under his banner Shri Ramarathna Productions. The film stars Hariprriya in the lead role with Sudharani in the other pivotal role. The music for the film is scored by Nakul Abhyankar. The cinematography and editing is done by Giridhar Divan.