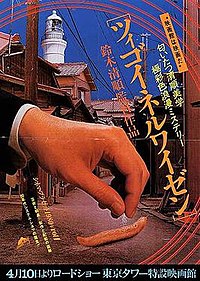 is a 1980 independent Japanese film directed by Seijun Suzuki and based on Hyakken Uchida's novel, Disk of Sarasate. It takes its title from a gramophone recording of Pablo de Sarasate's violin composition, Zigeunerweisen, which features prominently in the story. The film makes the first part of Suzuki's Taishō Roman Trilogy, followed by Kagero-za (1981) and Yumeji (1991), surrealistic psychological dramas and ghost stories linked by style, themes and the Taishō period (1912-1926) setting. All three were produced by Genjiro Arato.

Vacationing in a small seaside village, Aochi, a professor of German, runs into Nakasago, a former colleague turned nomad. Nakasago is being pursued by an angry mob for allegedly seducing and killing a fisherman's wife. Police intervene and Aochi vouches for his friend, preventing his arrest. The two catch up over dinner where they are entertained by and become smitten with the mourning geisha Koine. Six months later, Aochi visits his friend and is shocked to find that he has settled down and is having a child with Sono, a woman who bears a remarkable resemblance to Koine. Nakasago plays him a recording of Zigeunerweisen and they discuss inaudible mumbling on the record. Nakasago suddenly takes to the road again with Koine, leaving Sono to birth their child alone. Both men enter affairs with the other's wife. Sono later dies of the flu and is replaced by Koine as a surrogate mother. Nakasago takes to the road yet again. Aochi learns of Nakasago's death in a landslide. Koine visits Aochi and requests the return of the Zigeunerweisen record but he is sure he never borrowed it.