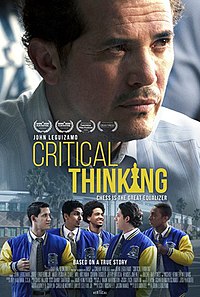 Set in 1998, Critical Thinking tells the true story of a Cuban-American teacher named Mario Martinez (known to students as Mr. T) and his national championship-winning chess club at Miami Jackson High School. Martinez finds himself working with minority students as a chess teacher. Sedrick, an African-American child, living in a single-parent household, takes up chess as an elective and meets Mr. T along with Ito, a student who works after school to support his education. The class also includes Rodelay, the class clown, and Gil, who is of Spanish descent. Mr. T deals with interference from Principal Kestel, who feels the class is made up of academic misfits. Kestel believes that the chess club brings little to no glory to the school. Principal Kestel threatens to cut funding from the chess club and use it to fund the school's football team. To offset the registration ticket for the Regionals, Mr. T. uses his personal savings. At the end of the road trip, Sedrick happily tells his dad about his victory. Sedrick's father tells him to get his life straight and decide on his future rather than waste his time on chess. He loses his job, and his mother throws him out of her apartment. He quits the team because he lost everything. It dawns on the boys that they need money to register for the State Championship. They also need Ito, who previously qualified for the regionals. If they can't achieve both, they risk forfeiting.