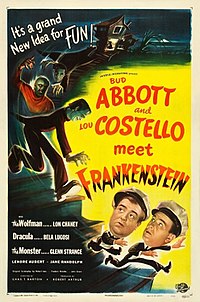 Lawrence Talbot (Lon Chaney Jr.) makes an urgent phone call from London to a Florida railway station where Chick Young (Bud Abbott) and Wilbur Grey (Lou Costello) work as baggage clerks. Talbot tries to impart to Wilbur the danger of a shipment due to arrive for "McDougal's House Of Horrors", a local wax museum. The crates purportedly contain the remains of Count Dracula (Béla Lugosi) and the Frankenstein monster (Glenn Strange). However, before Wilbur can understand, a full moon rises and Talbot transforms into a werewolf. He proceeds to destroy his hotel room while Wilbur is on the line. Wilbur thinks the call is a prank and hangs up. Meanwhile, the museum owner, McDougal (Frank Ferguson), has arrived to claim the shipments. When Wilbur badly mishandles the crates, McDougal demands that the boys deliver them to his museum so his insurance agent can inspect them.