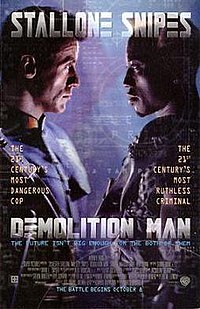 Demolition Man is a 1993 American science fiction action film directed by Marco Brambilla in his directorial debut. It stars Sylvester Stallone, Wesley Snipes, Sandra Bullock, and Nigel Hawthorne. Stallone is John Spartan, a risk-taking police officer, who has a reputation for causing destruction while carrying out his work. After a failed attempt to rescue hostages from evil crime lord Simon Phoenix, they are both sentenced to be cryogenically frozen in 1996. Phoenix is thawed for a parole hearing in 2032, but escapes. Society has changed and all crime has seemingly been eliminated. Unable to deal with a criminal as dangerous as Phoenix, the authorities awaken Spartan to help capture him again. The story makes allusions to many other works including Aldous Huxley's 1932 dystopian novel Brave New World, and H. G. Wells's The Sleeper Awakes.

In 1996, psychopathic career criminal Simon Phoenix kidnaps a busload of hostages and takes refuge in an abandoned building. LAPD Sergeant John Spartan runs a thermal scan of the building; finding no trace of the hostages, he leads an unauthorized assault to capture Phoenix. Phoenix sets off explosives to destroy the building; the hostages' corpses are later found in the rubble, and Phoenix claims Spartan knew about them and attacked anyway. Both men are sentenced to lengthy terms in the city's new "California Cryo-Penitentiary", a prison in which convicts are cryogenically frozen and exposed to subliminal rehabilitation techniques.