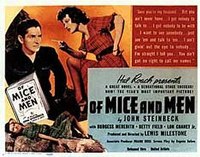 Of Mice and Men is a 1939 American drama film based on the 1937 play of the same name, which itself was based on the novella of the same name by author John Steinbeck. The film stars Burgess Meredith, Betty Field, and Lon Chaney Jr., and features Charles Bickford, Roman Bohnen, Bob Steele, and Noah Beery Jr. The film tells the story of two men, George and his mentally-challenged partner Lennie, trying to survive during the dustbowl of the 1930s and pursuing a dream of owning their own ranch instead of always working for others. Starring in the lead roles were relative Hollywood newcomer Burgess Meredith as George and veteran actor Lon Chaney Jr. (the son of famed silent film actor Lon Chaney) as Lennie. Chaney had appeared in more than 50 films by that point in his career, but Of Mice and Men was his first major role. Betty Field's role as Mae was her breakthrough role in film.

Two migrant field workers in California during the Great Depression, George Milton, an intelligent and quick-witted man (despite his frequent claims of being "not that smart"), and Lennie Small, an ironically-named man of large stature and immense strength who, due to his mental disability, has a mind of a young child, hope to one day attain their shared dream of settling down on their own piece of land. Lennie's part of the dream, which he never tires of hearing George describe, is merely to tend to (and touch) soft rabbits on the farm. George protects Lennie at the beginning by telling him that if Lennie gets into trouble George won't let him "tend them rabbits." They are fleeing from their previous employment in Weed where they were run out of town after Lennie's love of stroking soft things resulted in an accusation of attempted rape when he touched and held onto a young woman's dress.