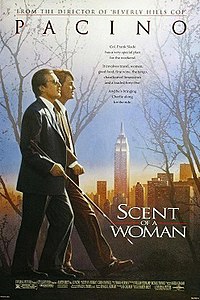 Scent of a Woman is a 1992 American drama film produced and directed by Martin Brest that tells the story of a preparatory school student who takes a job as an assistant to an irritable, blind, medically retired Army officer. The film is a remake of Dino Risi's 1974 Italian film Profumo di donna, adapted by Bo Goldman from the novel ill by Giovanni Arpino and from the 1974 screenplay by Ruggero Maccari and Dino Risi. The film stars Al Pacino and Chris O'Donnell, with James Rebhorn, Philip Seymour Hoffman and Gabrielle Anwar.

Charlie Simms is a student at the Baird School, an exclusive New England prep school. Unlike most of his peers, Charlie was not born into a wealthy family, and attends the school on a scholarship. Charlie accepts a temporary job over Thanksgiving weekend in order to afford a plane ticket home to Oregon for Christmas. The woman who hires him asks Charlie to watch over her uncle, retired Army Lieutenant Colonel Frank Slade, whom Charlie discovers to be a cantankerous, blind alcoholic. Charlie and George Willis, Jr., another student at the Baird School, witness three students setting up a prank that publicly humiliates the headmaster, Mr. Trask. Incensed over the prank, Trask quickly learns of the two student witnesses and presses Charlie and George to divulge the names of the perpetrators. Once George has left the office, Trask offers Charlie a bribe: a letter of recommendation that would virtually guarantee his acceptance to Harvard. Charlie remains silent, but is conflicted about what to do. Shortly after Charlie arrives, Frank unexpectedly whisks Charlie off on a trip to New York City. Frank reserves a room at the Waldorf-Astoria. During dinner at the Oak Room, Frank glibly states the goals of the trip, which involve enjoying luxurious accommodations in New York before committing suicide. Charlie is taken aback and does not know if Frank is serious. They pay an uninvited visit to Frank's brother's home in White Plains for Thanksgiving dinner. Frank is an unpleasant surprise for the family, as he deliberately provokes everyone and the night ends in acrimony. During this time, the cause of Frank's blindness is also revealed: While drunk, he was juggling live hand grenades, showing off for a group of second lieutenants, when one of the grenades exploded.