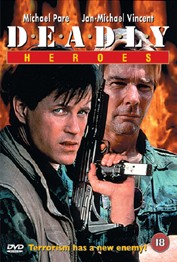 The film starts with a footage of a group of terrorists modifying toy guns to a real gun which can easily pass through a metal detector at Athens Airport. When a kid named Paul Cartowski discovers that the terrorist bring plastic guns, he soon wonders and tells his father who is also a former CIA and Navy SEAL, Brad Cartowski (Michael Paré). Then a gunfight begins and Cartowski is injured during a pursuit when the terrorists take the airport bus. The terrorists kidnaps his wife and fly her on a hijacked plane to North Africa. Cartowski goes in pursuit, aided by another ex-SEAL, Cody Grant (Jan-Michael Vincent).