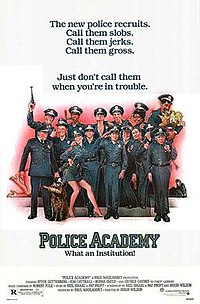 Police Academy is a 1984 American comedy film directed by Hugh Wilson in his directorial debut, and distributed by Warner Bros. Pictures. Its story follows a new recruitment policy for an unnamed police department's academy that is required to take in any recruit who wishes to try out to be a police officer. The film stars Steve Guttenberg, Kim Cattrall, and G.W. Bailey.

Due to a shortage of police officers, Mary Sue Beal, the mayor of an unnamed city, requires the police department to accept all recruits. Easy-going Carey Mahoney, a repeat offender, is given a choice by Police Captain Reed: enroll in the police academy or go to jail. Mahoney agrees to the former, but plans to perform badly enough to be expelled, since he cannot quit without facing jail time. The chief of police, Henry Hurst, outraged by the Mayor's plan, decides to make the experience so bad for the new recruits that they give up.