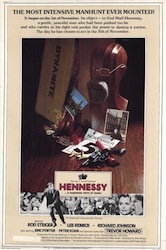 After the death of his family during a riot in Belfast, Niall Hennessy comes up with a plan to blow up the British Houses of Parliament.