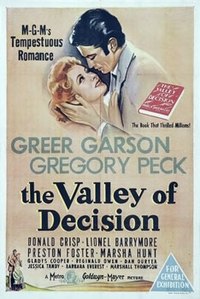 The Valley of Decision 1945

The Valley of Decision is a 1945 film directed by Tay Garnett, based on Marcia Davenport's 1942 novel of the same name. Set in Pittsburgh, Pennsylvania in the 1870s, it stars Greer Garson and Gregory Peck. It tells the story of a young Irish house maid who falls in love with the son of her employer, a local steel mill owner. The romance between Paul and Mary is endangered when Mary's family and friends, all steel mill workers, go on strike against Paul's father.