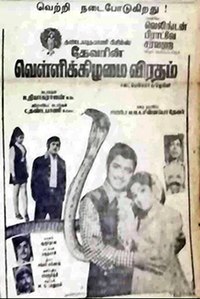 Vellikizhamai Viratham is a 1974 Tamil-language Hindu devotional film, directed by R. Thyagarajan and produced by Sandow M. M. A. Chinnappa Thevar under production by Dhandayudhapani films. The dialogue was written by Aaroor Dass and the story was written by Sandow M. M. A. Chinnappa Thevar. Music was by Sankar Ganesh. It stars Sivakumar, Jayachitra, Srikanth, Jayasudha and Nagesh playing lead roles. Major Sundarrajan and Sasikumar played supporting roles. Kamal Haasan worked under K.Thangappan as his dance assistant in this movie. The film was remade in Telugu as Nomu (1974) and in Hindi as Shubh Din (1974).