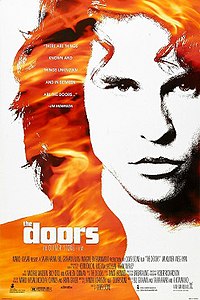 The Doors is a 1991 American biographical film about the 1960–1970s rock band of the same name, which emphasizes the life of its lead singer, Jim Morrison. It was directed by Oliver Stone, and stars Val Kilmer as Morrison and Meg Ryan as Pamela Courson (Morrison's companion). The film features Kyle MacLachlan as keyboardist Ray Manzarek, Frank Whaley as guitarist Robby Krieger, Kevin Dillon as drummer John Densmore, and Kathleen Quinlan as journalist Patricia Kennealy.

In 1949, young Jim Morrison and his family are traveling on a desert highway where they encounter an auto wreck and see an elderly Native American dying by the roadside. In 1965, Jim arrives in California and is assimilated into the Venice Beach culture. During his tenure studying at UCLA, he meets his future girlfriend Pamela Courson. He also meets Ray Manzarek for the first time, as well as Robby Krieger and John Densmore, all of whom form The Doors with Morrison.