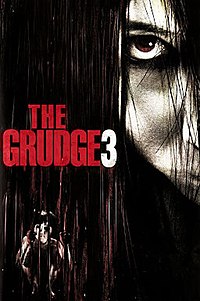 The Grudge 3 is a 2009 American supernatural horror film and the third and final installment in The Grudge original trilogy. Toby Wilkins, who had previously directed the successful film Splinter and the short film series Tales from the Grudge, took Takashi Shimizu's place as director who later served as executive producer, while Brad Keene replaced Stephen Susco as screenwriter.

After the events of the second film, Jake Kimble is under the care of Dr. Sullivan in an asylum. He is locked in his room following several escape attempts and is attacked by Kayako. The attack is seen on security cameras, although her ghost cannot be seen, and Jake is dead by the time Sullivan arrives with a security officer. News of the incident reaches Tokyo, Japan as Kayako's younger sister Naoko, aware of her older sister's haunting, travels to Chicago, Illinois USA.