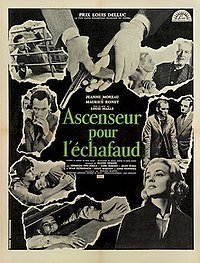 Elevator to the Gallows/ Lift to the Scaffold 1958

Elevator to the Gallows (; previously known as Frantic in the US), also known as Lift to the Scaffold (UK), is a 1958 French crime film directed by Louis Malle, starring Jeanne Moreau and Maurice Ronet as illicit lovers whose murder plot starts to unravel because of a malfunctioning elevator. The scenario was adapted from a 1956 novel of the same name by Noël Calef.

Florence Carala and Julien Tavernier are lovers who plan to kill Florence's husband, Simon Carala, a wealthy industrialist who is also Julien's boss. Julien is an ex-Foreign Legion parachutist officer and a veteran of the Indochina and Algeria wars. After working late on a Saturday, with a rope he climbs up one story on the outside of the office building, shoots Carala in his office without being seen, arranges the room to make it look like a suicide, and then makes his way out to the street. As he gets into his Chevrolet convertible outside, he glances up and sees his rope still hanging from the building. Leaving the engine running, he rushes back and jumps into the elevator. As it ascends, the caretaker switches off the power and locks up the building for the weekend. Julien is trapped between floors.