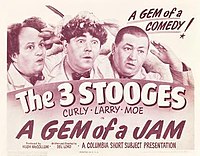 A Gem of a Jam is a 1943 short subject directed by Del Lord starring American slapstick comedy team The Three Stooges (Moe Howard, Larry Fine and Curly Howard). It is the 76th entry in the series released by Columbia Pictures starring the comedians, who released 190 shorts for the studio between 1934 and 1959.

The Stooges are janitors in a doctor's office working the night shift. The usual antics occur, first with Moe getting an electrical shock down his pants, leading to a cossack dance. Then, Curly gets his head wedged inside a fish bowl, containing a live fish. Though Moe and Larry eventually slide the bowl off, Curly starts to feel the swallowed fish tickling his insides. Moe manages to fish the aquatic critter out of Curly.