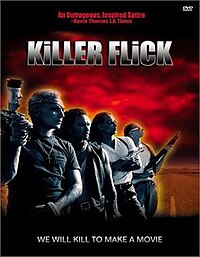 Killer Flick is a 1998 American independent black comedy road film written and directed by Mark Weidman that follows a group of people as they go on a crime spree and film their own activities.

The film centers on four aspiring filmmakers, Rome, Buzz, Max, and One-Eye (Tod Thawley, Creighton Howard, Emmett Grennan, and Christian Leffler), who go on a surreal rampage and make their exploits into a movie. While evading law enforcement, the filmmakers discuss their plans on how to make their movie as violent and sexy as possible so that they can sell it for a lot of money.