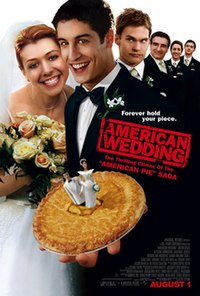 American Wedding (known as American Pie 3: The Wedding or American Pie: The Wedding, in some countries) is a 2003 American sex comedy film and a sequel to American Pie and American Pie 2. It is the third (originally intended final) installment in the American Pie theatrical series. It was written by Adam Herz and directed by Jesse Dylan. Another sequel, American Reunion, was released nine years later. This stands as the last film in the series to be written by Herz, who conceptualized the franchise, and also the only film in the series that does not star Chris Klein, who plays Oz or Mena Suvari, who plays Heather. The film's main plot focuses on the wedding ceremony of Jim Levenstein and Michelle Flaherty, and a subplot centers on Steve Stifler, and his outrageous antics including his attempt to organize a bachelor party, teaching Jim to dance for the wedding, and competing with Finch to win the heart of Michelle's sister, Cadence.