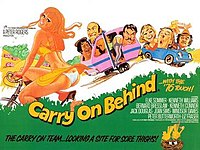 Carry On Behind is a 1975 British comedy film, the 27th release in the series of 31 Carry On films (1958–1992). It was the first entry in the series not to be scripted by Talbot Rothwell since Carry On Cruising 13 years previously. Also missing was series stalwart Sid James. James was busy touring in a play, while Rothwell's health prevented him from writing. The regular actors present are Kenneth Williams, Kenneth Connor, Jack Douglas, Joan Sims and Peter Butterworth, Bernard Bresslaw and Patsy Rowlands. Carry On Behind was the final picture in the series for Bresslaw (in his 14th appearance), Liz Fraser (in her fourth) and Rowlands (in her ninth) as well as Carol Hawkins (in her second). It saw the only appearances of Elke Sommer, Adrienne Posta, Sherrie Hewson and Ian Lavender in a Carry On film, and was the first of two entries in the series for Windsor Davies.

Frustrated butcher Fred Ramsden (Windsor Davies) and his dim electrician friend Ernie Bragg (Jack Douglas) happily head off for a holiday trip at the Riverside Caravan Site, while their respective wives Sylvia (Liz Fraser) and Vera (Patricia Franklin) look forward to their health farm holiday. Once at the caravan site of Major Leap (Kenneth Connor), Fred starts making eyes at two young female campers, Carol (Sherrie Hewson) and Sandra (Carol Hawkins). However, as Ernie talks in his sleep and any infidelities are likely to be spoken of in the marital bed after their holiday, Fred is despondent. Professor Roland Crump (Kenneth Williams) teams with Roman expert Anna Vrooshka (Elke Sommer) in an archaeological dig at the site. Arthur Upmore (Bernard Bresslaw) and his wife Linda (Patsy Rowlands) are saddled with her mother Daphne (Joan Sims) and her vulgar mynah bird. Arthur is caught in a compromising position with attractive blonde Norma Baxter (Adrienne Posta) whose husband Joe (Ian Lavender) is lumbered with their giant Irish wolfhound.