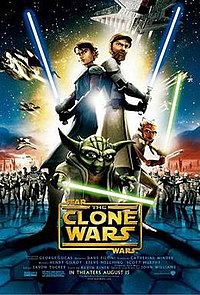 Star Wars: The Clone Wars is a 2008 American computer-animated military science fiction film directed by Dave Filoni, produced by Lucasfilm Animation, and distributed by Warner Bros. Pictures. The film is set in the Star Wars universe during the Clone Wars, a three-year conflict between the Galactic Republic and the Confederacy of Independent Systems, which started at the end of Star Wars: Episode II – Attack of the Clones (2002). Jedi Knight Anakin Skywalker is assigned an apprentice, Ahsoka Tano, and together they attempt to deliver Jabba the Hutt's kidnapped son Rotta back to his father, facing opposition from the Sith Lord and Separatist leader Count Dooku. Meanwhile, Obi-Wan Kenobi attempts to negotiate a treaty between the Republic and the Hutts, but clashes with Dooku's apprentice Asajj Ventress, who has kidnapped Rotta as part of a plot to frame the Jedi and turn Jabba against the Republic. Simultaneously, Padmé Amidala discovers that Dooku is in league with Jabba's uncle Ziro, who plans to have Jabba arrested by the Republic so that he could take over his criminal empire.

During the first year of the Clone Wars, Jedi Knight Anakin Skywalker and his master Obi-Wan Kenobi lead a small battalion of Republic Clone troopers against the Separatist droid army on the planet Christophsis. Awaiting reinforcements, the two Jedi greet a shuttle carrying the young Jedi Ahsoka Tano, who insists that she has been assigned by Jedi Grandmaster Yoda to serve as Anakin's Padawan. Anakin reluctantly accepts Ahsoka's apprenticeship, and the two succeed in deactivating the Separatists' energy field while Obi-Wan stalls the droid army commander, allowing a Republic victory. Ahsoka earns Anakin's respect.