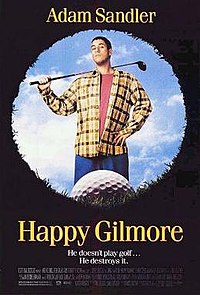 Happy Gilmore is a 1996 American sports comedy film directed by Dennis Dugan and produced by Robert Simonds. It stars Adam Sandler as the title character, an unsuccessful ice hockey player who discovers a newfound talent for golf. The screenplay was written by Sandler and his frequent collaborator Tim Herlihy, in their second feature collaboration after the previous year's Billy Madison; the film also marks the first of multiple collaborations between Sandler and Dugan. The film was released in cinemas on February 16, 1996 by Universal Pictures. Happy Gilmore was a commercial success, earning $41.2 million on a $12 million budget. The film won an MTV Movie Award for "Best Fight" for Adam Sandler versus Bob Barker.

Happy Gilmore is an aspiring ice hockey player who lacks on-ice skills, other than a powerful slapshot. After another failed hockey tryout, Happy's girlfriend leaves him because of his hockey obsession and lack of success.