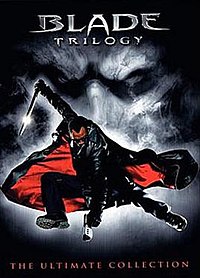 Blade is a film and television franchise based on the fictional Marvel Comics superhero of the same name, portrayed by Wesley Snipes in the film series and Sticky Fingaz on the television series. The films were written by David S. Goyer (who directed the third film and also served as a co-writer for the TV series in the first two and last episodes), based on the comics by Marv Wolfman, and Gene Colan. The three films were directed by Stephen Norrington, Guillermo del Toro and Goyer respectively, and distributed by New Line Cinema.