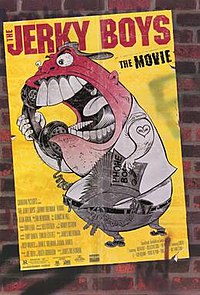 The Jerky Boys: The Movie, also known as The Jerky Boys, is a 1995 American comedy/crime film starring John G. Brennan and Kamal Ahmed, best known as the comedy duo the Jerky Boys.

The film opens in a New York police station as a pair of "low-lifes from Queens" named Johnny B. (Johnny Brennan) and Kamal (Kamal Ahmed) are taken into police custody and interrogated by an NYPD detective named Robert Worzic (Brad Sullivan). Worzic demands to know exactly how the pair got into their situation, so Johnny explains that for the past twenty years, he and Kamal frequently entertained themselves by performing prank calls on the telephone. He brings up an early call where he got his neighbor Brett Weir, the local goody-two-shoes kid, in trouble with his mother by impersonating an angry citizen and claiming that Brett has been spitting and cursing.