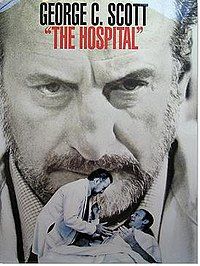 The Hospital is a 1971 American satirical film directed by Arthur Hiller and starring George C. Scott as Dr. Herbert Bock. It was written by Paddy Chayefsky, who was awarded the 1972 Academy Award for Best Original Screenplay. Chayefsky also narrates the film and was one of the producers; he had complete control over the casting and content of the film.

At a Manhattan teaching hospital, the life of Dr. Bock, the Chief of Medicine, is in disarray: he has left his wife, his children don't talk to him, and his once-beloved teaching hospital is falling apart.