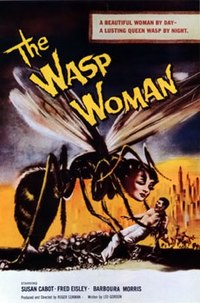 The Wasp Woman (a.k.a. The Bee Girl and Insect Woman) is a 1959, independently made, American black-and-white science fiction-horror film, produced and directed by Roger Corman, that stars Susan Cabot, Anthony Eisley, Michael Mark, and Barboura Morris. The film was originally released by Filmgroup as a double feature with Beast from Haunted Cave. To pad out the film's running time when it was released to television two years later, a new prologue was added by director Jack Hill.

In Hill's prologue, a scientist, Dr. Eric Zinthrop (Michael Mark), is fired from his job at a honey farm for experimenting with wasps.