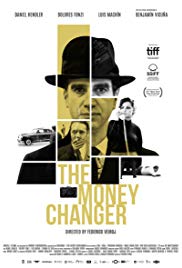 The Moneychanger is a 2019 Uruguayan comedy film directed by Federico Veiroj. It was selected as the Uruguayan entry for the Best International Feature Film at the 92nd Academy Awards, but it was not nominated. , 60% of the 20 critical reviews compiled by Rotten Tomatoes are positive, with an average score of 6.75/10.

In the 1970s, ambitious Humberto Brause agrees to a dubious money laundering scheme.