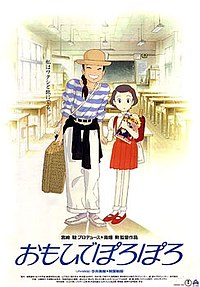 is a 1991 Japanese animated drama film written and directed by Isao Takahata, based on the 1982 manga of the same title by Hotaru Okamoto and Yuko Tone. It was animated by Studio Ghibli for Tokuma Shoten, Nippon Television Network and Hakuhodo, and distributed by Toho. It was released on July 20, 1991. The ending theme song is a Japanese translation of Amanda McBroom's composition "The Rose".

In 1982, Taeko Okajima is 27 years old, unmarried, has lived her whole life in Tokyo and now works at a company there. She decides to take another trip to visit the family of the elder brother of her brother-in-law in the rural countryside to help with the safflower harvest and get away from city life. While traveling at night on a sleeper train to Yamagata, she begins to recall memories of herself as a schoolgirl in 1966, and her intense desire to go on holiday like her classmates, all of whom have family outside of the big city.