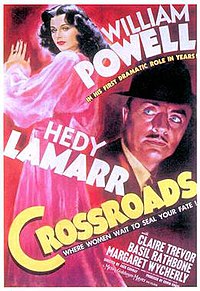 Crossroads is a 1942 mystery film noir directed by Jack Conway and starring William Powell, Hedy Lamarr, Claire Trevor and Basil Rathbone. Powell plays a diplomat whose amnesia about his past comes back to trouble him. The film was inspired by the 1938 French film Crossroads which had also had a British remake Dead Man's Shoes in 1940.

In 1935, French Diplomat David Talbot (William Powell) and his bride Lucienne (Hedy Lamarr) are enjoying their third month of marriage in Paris when Talbot is confronted by extortionist Carlos Le Duc (Vladimir Sokoloff) who demands money in exchange for not turning him in to the police.