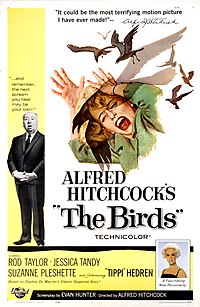 The Birds is a 1963 American natural horror-thriller film produced and directed by Alfred Hitchcock. Loosely based on the 1952 story of the same title by Daphne du Maurier, it focuses on a series of sudden and unexplained violent bird attacks on the people of Bodega Bay, California, over the course of a few days.

In the early 1960s, at a San Francisco pet store, socialite Melanie Daniels meets lawyer Mitch Brenner who is looking to buy lovebirds for his sister Cathy's 11th birthday. Recognizing Melanie from an unflattering incident reported in the newspapers, Mitch pretends to mistake Melanie for a shop employee. A somewhat contentious encounter ensues after the disapproving Mitch reveals he knows Melanie's identity. Mitch leaves without buying anything. To make amends, and finding him attractive, Melanie buys the lovebirds and delivers them to Mitch's apartment, only to learn he is away for the weekend at his family's farm in Bodega Bay. Melanie drives there with the lovebirds and meets the local teacher, Annie Hayworth. Annie previously dated Mitch, but ended it due to Mitch's cold, overbearing mother who dislikes any woman in Mitch's life.