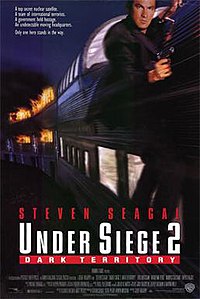 Under Siege 2: Dark Territory is a 1995 American action thriller film directed by Geoff Murphy, starring Steven Seagal as the ex-Navy SEAL, Casey Ryback. Set on board a train traveling through the Rocky Mountains from Denver to Los Angeles, it is the sequel to the 1992 film Under Siege also starring Seagal. The title refers to the railroading term that the subject train was travelling through dark territory, a section of railroad track that has no train signals and in which communications between train dispatchers and the railroad engineers were impossible.

Ex-Navy SEAL Casey Ryback has retired from the United States Navy and has settled in Denver, Colorado, owning and running a restaurant named Mile High Cafe, where he is also an executive chef. Sometime after, his estranged brother, James Ryback, dies in a plane crash. Casey meets James's daughter, Sarah, whom he will accompany to Los Angeles to attend his funeral. The two board the Grand Continental, a train traveling from Denver to Los Angeles through the Rocky Mountains. On board, they befriend a porter named Bobby Zachs and the train's chefs.