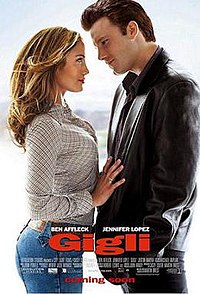 Larry Gigli is a low-ranking Los Angeles mobster who is not nearly as tough as he likes to act. Louis, a higher-ranking member of Gigli's organization, commands Gigli to kidnap the mentally challenged younger brother of a powerful federal prosecutor to use as a bargaining chip to save New York-based mob boss Starkman from prison. Gigli successfully convinces the young man, Brian, to go off with him by promising to take him "to the Baywatch", apparently a reference to the television show of that name, which seems to be Brian's singular obsession. Louis does not trust Gigli to get the job done right, so he hires a woman calling herself Ricki to take charge.