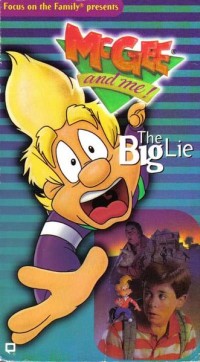 McGee and Me! is an American Christian television series created by Ken C. Johnson and Bill Myers. The series premiered on June 4, 1989, spanning twelve episodes and one special until its conclusion on June 11, 1995. Each half-hour-long episode centers on Nicholas, his cartoon friend, McGee, and the moral lessons they learn as Nick grows up after moving to a new town. McGee and Me! deals with issues such as honesty ("The Big Lie"), bullying ("Skate Expectations"), and faith in God ("Twister and Shout").

McGee and Me! stars Nicholas Martin, an 11-year-old aspiring artist and cartoonist who lives with his family in the town of Eastfield, Indiana. His father, David, is a newspaper journalist while his mother, Elizabeth, works at a counseling center. Nick, his parents, his older sister Sarah, and their younger sister Jamie, all first move to Eastfield in the first episode, moving into their grandmother's house to live with her. Nick often spends his time drawing and conversing with his imaginary friend, an animated cartoon character named McGee, who has wacky adventures of his own and serves as Nick's constant companion and confidant. Nick's life is constantly challenged by worldly trials and tribulations that put his morals and convictions to the test, with Nick learning valuable lessons along the way and, at times, facing the consequences of his actions.