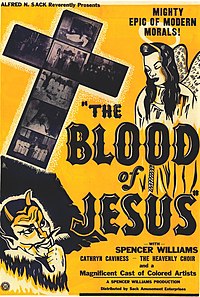 The Blood of Jesus is a 1941 American race film written by, directed by, and starring Spencer Williams. It was also released under the alternate title of The Glory Road. In 1991, the film was selected for preservation in the National Film Registry by the Library of Congress, being deemed "culturally, historically, or aesthetically significant".

In a small rural village with an African American population, a church group is holding a riverside baptismal service, and one of the faithful being immersed is the recently married Martha (Cathryn Caviness). However, Martha's husband Ras (Spencer Williams) is absent from the service – he claims he was hunting, but he actually poached a neighbor's boar. At home, Ras accidentally shoots Martha when his rifle drops on the floor and discharges. The church congregation gathers at Martha's bedside to pray for her recovery, and during this period an angel (Rogenia Goldthwaite) arrives to take Martha's spirit from her body. She is brought to the Crossroads between Heaven and Hell, and initially she is tempted by the slick Judas Green (Frank H. McClennan), who is an agent for Satan (James B. Jones). Judas takes Martha to a nightclub, where the floor show includes an acrobat and a jazz singer. Judas arranges to have Martha employed by the roadhouse owner Rufus Brown, but the angel returns and advises Martha to flee. As she is escaping, a nightclub patron mistakenly believes Martha is a pickpocket who robbed him. A chase ensues and Martha races back to the Crossroads between Hell and Zion, where Satan (along with a jazz band on a flatbed truck) is waiting for her arrival. The voice of Jesus Christ challenges the mob who go away. The sign at the Crossroad is transformed into the vision of Jesus Christ being crucified, and Christ's blood drips down on Martha's face. She awakens to discover she is home and her health is restored. Martha is reunited with her husband, who has now embraced religion. The angel who took Martha on her journey returns to bless the marriage.