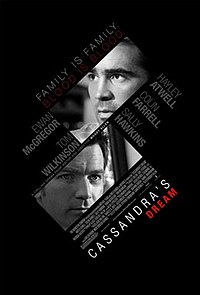 Cassandra's Dream is a 2007 dramatic thriller film written and directed by Woody Allen. Filmed in the United Kingdom, it was released in 2007 in Europe and in January 2008 in the United States. It was developed as a British-French-American co-production.

Brothers Terry (Colin Farrell) and Ian (Ewan McGregor), who live in South London, were raised by a weak father Brian (John Benfield) who runs a restaurant, and a strong mother Dorothy (Clare Higgins) who taught her sons to look up to their uncle Howard (Tom Wilkinson), a successful plastic surgeon and businessman.