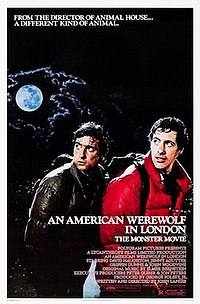 An American Werewolf in London 1981

An American Werewolf in London is a 1981 comedy horror film written and directed by John Landis. An international co-production of the United Kingdom and the United States, the film stars David Naughton, Jenny Agutter, Griffin Dunne and John Woodvine. The title is a cross between An American in Paris and Werewolf of London. The film's plot follows two American backpackers, David and Jack, who are attacked by a werewolf while travelling in England, causing David to question whether he will become a werewolf under the next full moon.

Two American backpackers from New York City, David Kessler and Jack Goodman, are trekking across the moors in Yorkshire. As night falls, they stop at a local pub called the Slaughtered Lamb. Jack notices a five-pointed star on the wall, but when he asks about it, the pub-goers become hostile. The pair decide to leave, and the pub-goers warn them to keep to the road, stay clear of the moors and beware of the full moon. David and Jack wander off the road onto the moors, and are attacked by an unseen, vicious creature. Jack is mauled to death and David is injured. The beast is shot and killed by some of the pub-goers, who came out searching for the boys. Instead of a dead animal, David sees the corpse of a naked man lying next to him before passing out.