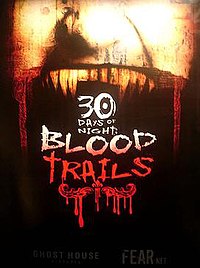 30 Days of Night: Blood Trails is a 2007 American 7-part horror miniseries that was released on FEARnet.com and FEARnet On Demand that acts as a prequel to the films 30 Days of Night and 30 Days of Night: Dark Days. Set two days before the events in the first film, the series focuses on George (Andrew Laurich), a young addict who makes a living seeking covert information for Judith, the weary but wise New Orleans, Louisiana vampire hunter. It is based on a subplot of the original comic that was left out of the film.

The series begins in New Orleans with a man named George covered in blood running towards a police officer who subdues and begins to arrest him when George ignores his commands to stop.