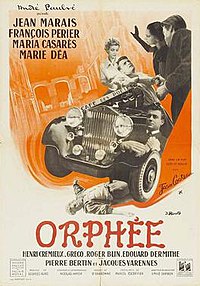 Orpheus (; also the title used in the UK) is a 1950 French film directed by Jean Cocteau and starring Jean Marais. It is the central part of Cocteau's Orphic Trilogy, which consists of The Blood of a Poet (1930), Orpheus (1950), and Testament of Orpheus (1960).

Set in contemporary Paris, the story of the film is a variation of the classic Greek myth of Orpheus and Eurydice. The picture begins with Orpheus (Marais), a famous poet, visiting the Café des Poètes. At the same time, a Princess (Casares) and Cégeste, a handsome young poet whom she supports, arrive. The drunken Cégeste starts a brawl. When the police arrive and attempt to take Cégeste into custody, he breaks free and flees, only to be run down by two motorcycle riders. The Princess has the police place Cégeste into her car in order to "transport him to the hospital". She also orders Orpheus into the car in order to act as a witness. Once in the car, Orpheus discovers Cégeste is dead and that the Princess is not going to the hospital. Instead, they drive to a chateau (the landscape through the car windows is presented in negative) accompanied by the two motorcycle riders as abstract poetry plays on the radio. This takes the form of seemingly meaningless messages, like those broadcast to the French Resistance from London during the Occupation.