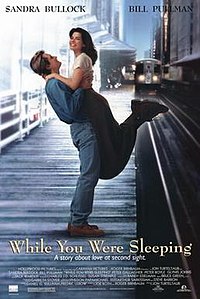 While You Were Sleeping 1995

While You Were Sleeping is a 1995 American romantic comedy film directed by Jon Turteltaub and written by Daniel G. Sullivan and Fredric Lebow. It stars Sandra Bullock as Lucy, a Chicago Transit Authority token collector, and Bill Pullman as Jack, the brother of a man whose life she saves, along with Peter Gallagher as Peter, the man who is saved, Peter Boyle and Glynis Johns as members of Peter's family, and Jack Warden as a longtime family friend and neighbor.

Lucy Eleanor Moderatz is a lonely fare token collector for the Chicago Transit Authority, stationed at the Randolph/Wabash station. She secretly loves Peter Callaghan, a handsome commuter, though they are strangers. On Christmas Day, she rescues Peter from the oncoming Chicago "L" train after muggers push him onto the tracks. She accompanies the comatose Peter to the hospital, where a nurse overhears her musing aloud, "I was going to marry him." Misinterpreting, the nurse tells his family that she is his fiancée.