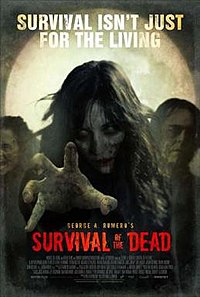 The prologue follows the actions of National Guard Sergeant "Nicotine" Crockett, who, along with Kenny, Francisco and Tomboy, desert their posts and rob the protagonists of the previous film. Meanwhile, off the coast of Delaware lies Plum Island, home to two feuding Irish families: the O'Flynns and the Muldoons. The former family, led by Patrick O'Flynn, round up a posse to kill the undead on the island. O'Flynn learns that the Muldoons are keeping their undead loved ones safe until a cure is found. Tensions come to a head when O'Flynn and his posse arrive at the Muldoon house to dispatch their undead children, only to engage in a brief gunfight that leaves a woman dead as well. Unable to put the children down himself, Patrick surrenders his weapons when the Muldoon posse arrives. Seamus Muldoon contemplates killing Patrick until Patrick's daughter Janet suggests he be exiled from the island instead.