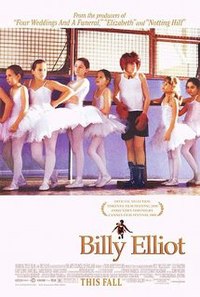 Billy Elliot is a 2000 British dance drama film directed by Stephen Daldry and written by Lee Hall. Set in County Durham, England during the 1984–85 miners' strike, the film is about a working-class boy who discovers his passion for ballet, despite his father's objection and the negative stereotype associated with being a male ballet dancer. The film stars Jamie Bell as 11-year-old Billy, Gary Lewis as his father, Jamie Draven as Billy's older brother, and Julie Walters as his ballet teacher.

In 1984, Billy Elliot, an 11-year-old from the fictional Everington in County Durham, England, loves to dance and has hopes of becoming a professional ballet dancer. Billy lives with his widowed father, Jackie, and older brother, Tony, both coal miners out on strike (the latter being the union delegate), and also his maternal grandmother, who has Alzheimer's disease and once aspired to be a professional dancer.