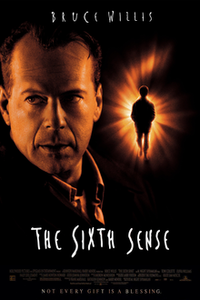 The Sixth Sense is a 1999 American psychological thriller film written and directed by M. Night Shyamalan. It stars Bruce Willis as a child psychologist whose patient (Haley Joel Osment) claims he can see and talk to the dead.

Philadelphia-based child psychologist Malcolm Crowe returns home with his wife, Anna, after having been honored for his work. Vincent Grey, a former patient Malcolm had treated for hallucinations, breaks into their house and accuses Malcolm of failing him before shooting Malcolm and then himself.