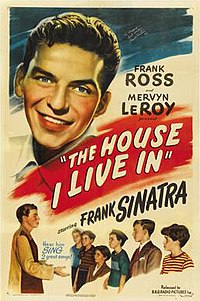 The House I Live In is a ten-minute short film written by Albert Maltz, produced by Frank Ross and Mervyn LeRoy, and starring Frank Sinatra. Made to oppose anti-Semitism at the end of World War II, it received an Honorary Academy Award and a special Golden Globe Award in 1946.

Sinatra, apparently playing himself, takes a break from a recording session and steps outside to smoke a cigarette. He sees more than ten boys chasing a dark-haired boy and intervenes, first with dialogue, then with a short speech. His main points are that we are "all" Americans and that one American's blood is as good as another's.